Warped - Dueling Critics
​Rape Through Different Lenses: Warped at Stage Left The Rashomon story—one in which what occurs depends on who’s narrating—originated with a contested account of rape, and it returns to its roots in this world premiere production. Barbara Lhota’s play Warped posits a rape-or-was-it committed by two police officers-or-both-or-one when they give an intoxicated-or-was-she woman a ride home from a violent-or-was-it encounter with a boyfriend-or-was-he. Director Jason A. Fleece and his cast resist the temptation to put thumbs on the scale of any one interpretation, and leave us with questions rather than answers about what constitutes truth, and what constitutes rape. The company‘s “Partnership for Action” with Rape Victim Advocates seems almost defensive, given the production’s studied neutrality about whether the alleged victim is telling the truth. But the honesty of the two men also comes into question, and we become aware that each of the pair of female detectives assigned to the case has her own prejudices to overcome. All the performances are strong, with exceptional turns from Kate Black-Spence as the alleged victim and Stage Left/Babes With Blades ensemble member Lisa Herceg as the senior detective. And kudos to scenic designer Stephen Carmody, lighting designer John Kohn III, sound designer Adam Smith and properties master Joshua Hurley for creating a persuasive police car and a bedroom which faces first this way and then that—and then the other—as the increasingly complex story unfolds.

​Warped continues Thursdays through Sundays at Stage Left just through next weekend (October 6) at Theater Wit, 1229 West Belmont. Tickets are $25-$27. This Sunday (September 29) will feature a post-show discussion of unreliable witnesses in the legal system with Professor Jeffrey Urdangen of Northwestern’s law school.

Sexual assault is a difficult matter all around. Thanks in part to a fearmongering, sexist culture, it’s something many women (including me) fear above all else. It’s also extremely complex from a legal perspective, often requiring the victim to relive a horrific experience and boiling down to he-said, she-said. Warped looks at one such incident from three different viewpoints, as two women try to find out what really happened. Stage Left Theatre’s world premiere of Barbara Lhota’s timely, provocative play verges on overdone, but hits right in the gut. Chicago police officers Hal (Mark Pracht) and Alex (Nick Mikula) are nearing the end of their shift when they encounter Hope (Kate Black-Spence), a drunk young woman wandering alone on North Avenue Beach. Traveling out of their district and neglecting to call in, they drive her back to her Uptown apartment. One hour later, Hope emerges from her apartment screaming rape. One day later, detectives Jules (Lisa Herceg) and Kim (Victoria Caciopoli) listen to Hal, Alex and Hope’s separate and wildly varying accounts of the incident. As more details are revealed, Jules and Kim find that “truth” can be more fluid than absolute, and more strange than sure. Inspired by the film “Rashomon”,Warped looks at the aftermath of violence, the abuse of power, and the confusion of perspective with sharp intelligence and dark wit. The fear of assault is often more prevalent in women, and Lhota’s dialogue is gritty without being exploitative, hitting on the details that will have many buying pepper spray and enrolling in self-defense courses. Whether or not assault occurred in this case, it does occur, and Lhota displays a detailed understanding of escalating circumstances, misunderstandings and the very fraught issue of consent. The play’s structure – incidents of the fateful night told in flashback to the detectives, with the occasional scene in the present – carries through the entire two hours, and works well to build and sustain suspense. There wasn’t a time when I wasn’t completely invested in the story. If anything, Warped’s occasionally overzealous production values are what threatened to take me out of the moment. Adam Smith’s sound design reminded me a bit too much ofLaw and Order: dramatization of crime rather than real-life horror. Ditto John Kohn III’s lighting, which relies a bit too heavily on spotlights to indicate who was now telling the story, which the audience is perfectly capable of discerning. I wish Smith and Kohn would have scaled back somewhat, and let the powerful script speak for itself. Stephen H. Carmody’s set, however, is quite strong, using minimal materials to convey a police department office, a cop car and a shabby apartment.

If the production values almost took me out of Warped, the show’s flawless cast brought me back. Herceg is the epitome of tough-talking, yet vulnerable detective – she could slip into caricature territory but instead is utterly natural. Caciopoli’s more easygoing mannerisms provide an excellent foil to Herceg, and the two have an excellent rapport. With his handlebar mustache and imposing stature, Pracht resembles many real-life Chicago cops, and slips in and out of flashbacks with ease. Max Ganet is stuttering perfection as a Jesse Eisenberg-esque neighbor/witness, and Mikula gives Alex likability with an edge. Black-Spence gives the strongest performance: her Hope is a study in contradictions, in control one moment and dangerously unstable the next, but at all times a damaged woman who may or may not be all she seems. Warped isn’t always easy to endure, but it’s a story that needs to be told. People are messy: they can take advantage of others, indulge to excess, and lie to protect themselves. That said, no one deserves to be victimized, in any way. Lhota’s fantastic script and the truly talented ensemble make this premiere hard to watch, and impossible to shake.​
Rating: ★★★½
​
​Strangers and Romance (Photos from current production, reviews from previous productions and this production) 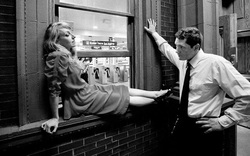 Beverly Friend (Theater Critic) - "Jupiter Theater opens with a very tidy package, the Midwest premier of two one-act plays by Barbara Lhota. Both take place on Christmas Eve, and, in their unfolding, provide a gift or sheer pleasure for their audience." Theater Critic for Pioneer Press Group 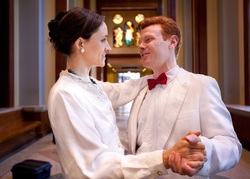 Boston Herald's Pick for Top Ten Plays in Boston in 1993

"Los Desaparecidos (The Vanished) delivers not only rough-and-tumble entertainment, but enough intrigue and romance to rivit the most avid soap opera fans--in a good way....With clever, witty dialogue and vigourous swordplay that includes rapiers, knives, daggers and shields, the play makes for a thoroughly enjoyable time. The final scenes of the play are infused with drama and emotion and a healthy does of surprising twists and turns that made some in the audience gasp." Elena Ferrarin, Daily Herald Chicago

"Los Desaparecidos is a work full of loaded subtexts of extreme conflict and well-kept secrets." ...."The work plays clearly with the emotions of the spectator, who begins to discover the threads of the plot..Surprises in  which tense and critical moments are suddenly turned around by the humor with which the dramatists has seasoned the speechs." - Elio Leturia, Daily HOY 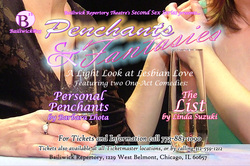 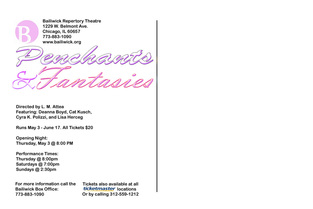 "The juxtaposition between Louise's struggle to find just the right adjectives and Jackie's reaction to the words is amusing—there's something wonderfully human about the way standard English can get so utterly lost in translation as it moves through cyberspace. As was the case when the women were exchanging cyberchat, the audience sees what each gal is thinking as well as saying. The reactions are clever and funny, all leading up to a somewhat surprising and sensual finale. " - Catey Sullivan, Windy City Times

"The overlapping dialogue is cute and clever as they find personal profiles of interest and then rule them out because of potential signs of neurosis. (Personal Penchants) presents a silly yet realistic look at the online search for love."  - Venus Zarris, Gay Chicago

“The Double is a triple threat as a comedy, romance, action play!”

“Leading the laughter with an ode to Rosalind Russell is spectacular, wisecracking Lisa Herceg (Roz).  Herceg zings every single line and sets off the laugh track inside my head.” – Katy Walsh, Chicago Theater Beat – 3 and half stars – Highly Recommended

“It is Lisa Herceg as the grande dame Rollins, though, who makes the most of her material. Herceg kicks it, elegantly, into the highest rafters with her every carefully timed gesture and magnificent line reading.” – Brian Kirst, Sheridan Road Magazine – Highly Recommended

"The Double, Babes With Blades latest offering, is an diverting period piece performed with enthusiasm and moments of panache.” – John Dalton, Centerstage, MUST SEE

“The script, the company's first foray into comedy, was crafted by Barbara Lhota, and reflects an endearment for the company, the period, and the genre. The comedy is broad but not slapstick, and clearly the actors are enjoying themselves as the plot unfolds and the mayhem begins.” – Windy City Theater, Maggid Jim, Highly Recommended

“The story is sharp and clean, and the text is laced with rapier wit. The comedy comes in broad strokes as well as sharp jabs, and the characters parry and thrust the rapid-fire dialogue. “ – Bill Barry Jr., Worth the Price of Admission, Highly Recommended
“The Double is a pleasant surprise; Babes With Blades give a performance that’s unpredictable and laugh-out-loud funny.” - Kaylee Holt, Chicago Theatre Review, Recommended

“What does stand out is the martini-dry dialogue and some delicious swordplay sequences designed by Libby Beyreis.” – Kerry Reid, Chicago Tribune