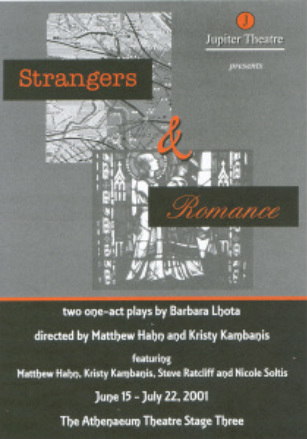 *Published in Smith and Kraus' Women Playwrights, The Best Plays of 2001 edited by D. L. Lepidus. This one-act has had over 18 productions.

A couple meet in a train station to play a game they have played for years. Each time Madison and Maddie come here, they pretend to be a new set of strangers, meeting and attracting each other as if its the very first time. Unfortunately, Madison need to play the game and "get it right" has become obsessive. He uses it as an escape from the pain he feels due to an unspoken loss in their marriage. But no matter how he tries to evade his feelings, reality keeps creeping into their strange fantasy. And Maddie cannot nor will not  "get it right" anymore. In the end, Madison must finally face his own guilt and deep sadness over the loss of their child. And when he does, a miraculous change comes about.

*Companion piece to Strangers, published in Smith and Kraus' Women Playwrights: The Best Plays of 2001 edited by D. L. Lepidus.

Miriam, a Medieval Literature professor meets Mick, a mail guy in a closed chapel in Boston on Christmas Eve in the middle of the night. Miriam has left her sex-less marriage because she believes her husband is no longer attracted to her and Mick has just been dumped by his fiancé.  These two wounded opposites bump heads and philosophize about God and the writers of Bazooka bubble gum fortunes and finally manage to comfort each other.   As the night progresses, they help each other uncover their best and most alluring qualities in this old fashion romance. 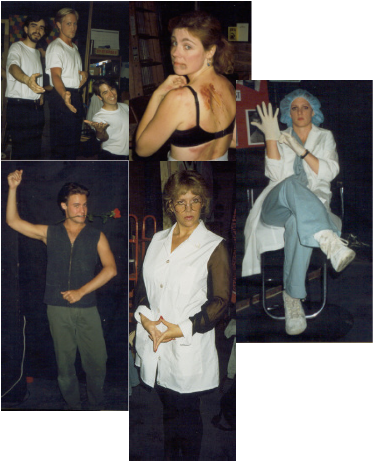 *Received recognition from The Boston Herald as one of the top ten plays of the 1993 season.

Sarah, late 20s, a lonely Harvard medical school student places a personal advertisement.  At first none of the men live up to her expectations.  But soon she meets Mickey, a Cambridge Tour Guide who plays in a band.  Despite Sarah’s obvious attraction to him, she evades Mickey’s romantic advances.  And what’s worse is that she has begun to have horrible nightmares that she cannot explain to even her closest friends. In the nightmares, Sarah is haunted by a mysterious woman, not unlike herself, but an older, wiser, more cynical version. As the play unfolds the dreams reflect back on events that happened some time ago. Sarah is unable to put together the meaning of these dreams until she is forced to take care of an older woman, a victim that comes into the emergency room one evening. In caring for this woman, she begins to accept her own tragic experience and begins to heal. 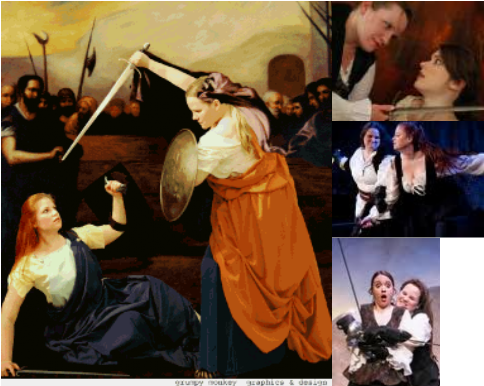 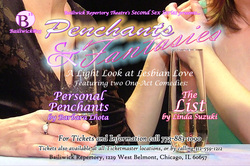 Lesbian “life-coach” Jackie is impulsive, free-spirited, and looking online for an experienced, uninhibited soul-mate. “Bi-possible lesbian” Louise is a nervous English teacher with a habit of over-analyzing and no “experience” whatsoever. When the two of them finally meet after connecting on-line, their hidden reactions to each other spill out as they fumble their way through this hilarious, unpredictable first date.

Blurb: A couple of single lesbians (opposites) meet through an online dating service and try to navigate through a disastrous and distracting first date.

THE NERDY GIRL & THE INTERGALACTIC DOG 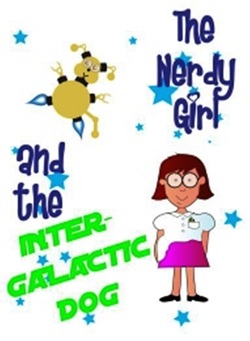 THE NERDY GIRL & THE INTERGALACTIC DOG
***Updated with Music***


Being an eleven year old girl is not easy...especially when you're Louise Noble-Bells. Louise is used to a life of world travel with her antique-dealing parents and being schooled at home. Now her parents have decided to settle in Chicago, open a coffee shop, and send Louise to a new school. As if that weren't enough, Louise has been befriended by a dog that has fallen from space. And his presence has given her cat the power of speech...and does she have a lot to say!

Click Here and Watch a Clip from The Nerdy Girl

GREENSKIN
By Barbara Lhota & Ira Brodsky
Dramatic Comedy
10 Characters:
Running Time: 90-110 minutes
Grace Miles is having a problem with men. In general. And her family. In general. But one alligator, in particular, has her going a little crazy. Especially since he isn’t real. And when her younger sister, Vicky, starts seeing the same hallucination, Grace must find out why. And the answer may not be very pleasant. Green Skin is a quirky dark comedy that examines the issue of sexual abuse from a totally unique and complex perspective.
MORBID CURIOSITY
By Barbara Lhota
Mystery
10 Characters:
Running Time: 90-110 minutes
Shortly before he is to marry his headlining singer, a club owner is shot to death outside his New York jazz club. His bookish daughter’s obsession with solving her father’s murder leads her through the tangles of their trouble relationship in the heart of her own morbid curiosity. Morbid Curiosity, a mystery, is written in a film noir style and centers on the relationship between the daughter, Natalie, and, Chrissy, a streetwise spunky young woman who happens to be in the wrong place when the murder occurs. The twists and turns keep the audience guessing.
HANGING BY A THREAD
By Barbara Lhota
Drama
10 Characters:
Running Time: 90-100 minutes
Marilyn moves to Boston from Rockford, Illinois to finally put her psychology degree to good use at a rehabilitation facility for psychiatric and head injured patients. She leaves behind a philandering husband believing wholeheartedly that her absence will make his heart grow fonder. She moves in with a quirky roommate and begins her life again. Only things become difficult as she finds herself attached to the many forgotten and hopeless facility patients. She identifies with them and it causes her to examine the darkness places of her own life.  Eunice a suicidal, yet extremely intuitive patient whos own husband left her many years ago sees right through Marilyns facade. And Marilyn makes Eunice her most important project.  Marilyns need to save Eunice from suicide is linked with her own need to save herself.  Unfortunately, she cannot save Eunice. And when her husband calls from Rockford asking for divorce papers, Marilyns world falls apart. The question iswill she save herself?
SWIMMING IN THE COLORED LIGHTS
By Barbara Lhota
Drama
3 Characters: 1 M, 2F
Running Time: 90-100 minutes
Kathleen, 17, a naive young lady who attends an all-girl catholic high school, runs away from her difficult family situation to find Molly, a 30-year old stripper, in a diner bathroom crying her eyes out.  Molly’s life has been falling apart. The 30-something year old stripper was fired for being too old and her boyfriend, who won’t marry her, has been racking up debt at the tracks. These two opposites quickly become friends and Molly agrees to allow Kathleen to stay with her and her boyfriend, Jack, for a couple of days in their trailer. Set in the 70s in Atlantic City, the play has a gritty film-noir feeling. Unfortunately, Jack has a terrible gambling addiction that he is trying desperately to support. As the play unfolds, not only does he convince Molly to teach Kathleen to strip to help pay off his debts, but he develops an elaborate plot to kidnap young Kathleen and obtain a healthy ransom from her wealthy father. Luckily, Kathleen has a different plot in mind.
THE COLLABORATION
By Barbara Lhota & Ira Brodsky
Dramatic Comedy
5 Characters:
Running Time: 90-110 minutes
Two writers in opposite cities collaborate on a new script together. Georgie, a straight woman in Chicago and Will, a gay male in New York, lived and wrote together for five years. Now they are apart for the first time and agree to write one final script. The story of the inner play is about a man who is marrying his gay lover only his female best friend keeps getting in the way.  Through the made-up characters, curiously similar to Georgie and Will themselves, we discover the writers real desires and needs. They live through the fiction for neither has any love interest to speak of in real life.  When they come to the end of the script, the writers are unable to complete it. That is, until Will forces Georgie to uncover the truth about why she left New York.  The Collaboration bounces between the playwrights working writing sessions and the complicated entangled story of their created characters.
AND ALL I LOVED
By Barbara Lhota
Romantic Comedy
Characters:
Running Time: 90-100 minutes
SOME OF THE ONE-ACTS
PRETTY CRAZY IN DETROIT
By Barbara Lhota & Ira Brodsky
Dramatic Comedy
3 Characters: 3F
Running Time: 40-50 minutes
A sharp-tongued young woman, Ronnie refuses to do anything but mope around and await the next postcard from her runaway mom. She longs to meet her mother again but fears that she may inherit her psychosis.  Ruth, her aunt, is insanely jealous of her nieces obsession with her irresponsible sister who wanders the country doing drugs and using psychiatric facilities like pit stops.   To make matters worse, the neighborhood they live in is going from bad to worse and Ruth cant keep enough piano students to pay the bills anymore. Furthermore, she is too old and used up now that shes raised Ronnie to find a man to love and support her. The unhappy two have no choice but to take on a border. When Mel, a young racially-mixed lesbian college student walks into their home, they are finally confronted with the stagnancy of their bitter relationship. Mel dares Ruth into flirting with new romantic possibilities and challenges Ronnie to act on her most dangerous impulse--to visit her mother. And in the end, she brings them all closer to each other and their real selves.

THE BEEKEEPER AND HIS DAUGHTER